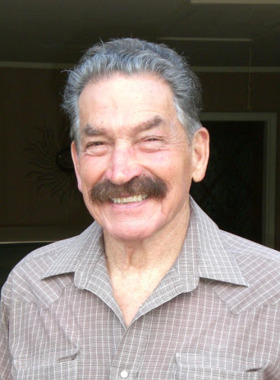 Back to Elbert's story

A memorial service will be held at Stephens Funeral Home of Meridian on Saturday, Dec. 14, 2019, at 2 p.,m., for Mr. Elbert Clinton "Doc" Strange. Mr. Strange passed away on Nov. 19, 2019, at the age of 91 years. He was a resident of Collinsville.
Elbert was the son of Mack Clinton Strange and Clara Ivy Marybelle Scott Strange and the oldest of eight siblings, Volna Ivyloy Strange Butler, Mary Edna Strange Anderson, David Haskell Strange (deceased), Arrie Pearl Strange Butler Dollard, Joseph Ernest Strange, Mack Craig Strange and Katherine Irene Strange Rouse.
He was born in Kemper County, Miss., but the family moved to Atlanta, Texas then later to Pascagoula, Miss. Elbert enlisted in the Navy at age 18 and served honorably for three years.
After his military service, he returned to Pascagoula and married Catherine Lee Jones. Elbert and Catherine moved to Brownsville, Texas where Elbert started his career with Pan American World Airways as an aircraft maintenance mechanic.
Relocating to New York, Elbert moved up the ranks quickly because of his intellect, talent and work ethic. He became a flight engineer, a pilot, and Captain, flying 747's during the Golden Age of commercial aviation.
Upon retirement Elbert bought property in Collinsville where he resided and farmed until his death.
He is survived by his life partner Sarah Brown of Hattiesburg Miss.; his children, Charles William Strange, Erica Stephanie Strange, Noel Kelvin Strange; six grandchildren and eight great-grandchildren.
Visitation will be from 1 p.m. until service time.
Friends may sign the online register at www.stephensfunerals.com.
Published on December 11, 2019
To plant a tree in memory of Elbert Clinton "Doc" Strange, please visit Tribute Store.

Plant a tree in memory
of Elbert

A place to share condolences and memories.
The guestbook expires on March 10, 2020.

Eva Janelle Strange Hnton
I remember Elbert was our most handsome cousin! When we were young.
Rest In Peace Elbert.
View all